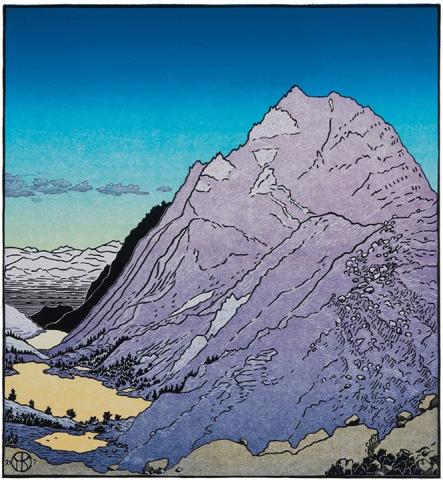 In 2014, Kim Stanley Robinson had participated in an expedition to name a peak in the Sierra Nevada as Mount Thoreau! That feat and feast is now celebrated in "Naming Mt. Thoreau" (Artemesia Press; at Amazon) -- a collection edited by Laurie Glover and with a cover by the great Tom Killion, illustrating this article (he also did the cover to Rexroth in the Sierra).

Naming Mt. Thoreau is a collection of essays that arose from the simple undertaking of ascending a mountain; it is a meditation on friendship and influence, proximity and distance. Composed of a series of essays, poems, and photographs, this volume contains contributions from Michael Blumlein, Dick Bryan, Darryl DeVinney, Hilary Gordon, Tom Killion, Paul Park, David Robertson, Kim Stanley Robinson, Carter Scholz, Gary Snyder, and Christopher Woodcock.

This compilation's authors started out to rename USGS peak 12,691 Mt. Thoreau to honor Henry David Thoreau for his writing that has been so important to generations of Americans seeking to define their relationship to wilderness and nature. Taking their cues from Thoreau, they offer this collective set of texts and images as a call to close attention. Not just to what is present but to what is not, but still is.

Here is also a video of a celebration of Mt. Thoreau at the Davis Arts Center from February 2017 with many contributors to that book.

Halfway around the globe: Stan wrote about his experience of visiting Antarctica again (after that 1995 trip that inspired the novel Antarctica) in an article for the Smithsonian -- "The Daring Journey Across Antarctica That Became a Nightmare" -- which recounts the "Worst Journey in the World", the Cherry-Garrard side-expedition within Scott's failed journey to the South Pole in 1911, the amazing and proverbial feat of survival amid an Antarctic winter night, all done with a scientific purpose. The article features beautiful black and white photos by Shaun O'Boyle. Stan's account ends with his own visit in these historical places, at the makeshift rock "hut" they made at Igloo Spur, Cape Crozier:

The view from the ridge was immense, the sunlight stunning, the wind exhilarating. I tried to imagine keeping your wits about you in a wind like this one, in the dark; it didn’t seem possible. Confused and scattered though I was, I still felt sure we were at a holy place, a monument to some kind of brotherly craziness, a spirit I could feel even in the blazing sunlight. The wind brought it home to me, slapping me repeatedly with what they had done: Five days here in the howling night, in temperatures maybe 60 degrees lower than the bracing zero that was now flying through us. It was hard to believe, but there the stone ring lay before us, shattered but undeniably real.

Now, change of scope: Stan was interviewed by Big Echo and discusses science fiction, politics, Marx, revolution, Braudel, history, race/gender/class, and all that -- a very interesting read indeed! This is part of a series of interviews with SF writers on the occasion of the sesquicentenary of the publication of Marx's The Capital. Some extracts:

I definitely think there are two parts to Marx. In one, where he is analyzing the past, he is a historian and philosopher, and one of the best and most important ever to have lived. In the other, when he either predicts the future, declaring it is determined, or else calls for a particular future by way of choice and action, he is being a science fiction writer. Even a utopian science fiction writer. I say this because I think the future is radially unpredictable, and anyone who begins to talk about the future in any detail is by that very act doing science fiction of one sort or another.  No one is any good at prediction, but there can be interesting science fiction nevertheless.

So I was very lucky in my teachers, and I read widely, and I was part of the Sixties generation, including the California New Age hippie Buddhist mountaineering element. I am a very characteristic example of my place and time, greatly influenced by my friends and my era. [...] My project is to be a novelist, and to try to write good novels, to be a good artist. That’s it for me, first and last. A very bourgeois romantic hippie Buddhist Californian goal in life, I know. But also, if trying for that means telling revolutionary stories, as so often it seems to me, then I do that. [...] I’ve been trying to model a historical vision that sees science as utopian, and thus opposed to capitalism, rather than complicit with, and even a tool of capitalism.

There is no such thing as a feminist capitalism, there is no such thing as a non-racist capitalism. Every leftist must needs be a feminist and anti-racist, it’s part of the definition of the left [...] As a straight white American male artist, getting older, I have been interested to figure out how I can help make a better world, having lived a life of incredible privilege and luck when compared to most human lives so far. It’s not obvious how to do this, especially since my chosen art form, the novel, has historically been a form about the bourgeoisie and their problems.

we make assumptions about the rate of change that will occur in the future. This is simple enough to be graphed: we often talk about “straight line extrapolation” in which the rate of change persists as it is, then there is accelerating change, and also decelerating change, less often mentioned, as change has been accelerating for a while now. But the logistic curve, a kind of big S in which slow change eventually accelerates and speeds up, but then hits various physical constraints or the like, and slows down again, is a very common phenomenon in nature. I find reasons to believe that the logistic curve will probably describe the rate of change in human history— but when will the curves in this big S graph occur? No one can say.

KSR was also interviewed by The Source Code podcast about Mars colonization and the economics of space exploration!

Here’s how I think science fiction works aesthetically. It’s not prediction. It has, rather, a double action, like the lenses of 3D glasses. Through one lens, we make a serious attempt to portray a possible future. Through the other, we see our present metaphorically, in a kind of heroic simile that says, “It is as if our world is like this.” When these two visions merge, the artificial third dimension that pops into being is simply history. We see ourselves and our society and our planet “like giants plunged into the years”, as Marcel Proust put it. So really it’s the fourth dimension that leaps into view: deep time, and our place in it. Some readers can’t make that merger happen, so they don’t like science fiction; it shimmers irreally, it gives them a headache. But relax your eyes, and the results can be startling in their clarity.

KSR was among those that sent their appreciations about the death of Ursula K. Le Guin, appearing in the March issue of Locus. More appreciation for UKL (before her passing) with KSR promoting "The Left Hand of Darkness" as one of his favorites, in an article for Science Friday.

George R. R. Martin's and KSR's panel at the Arthur C. Clarke Center for Human Imagination from last May is now available as a podcast.