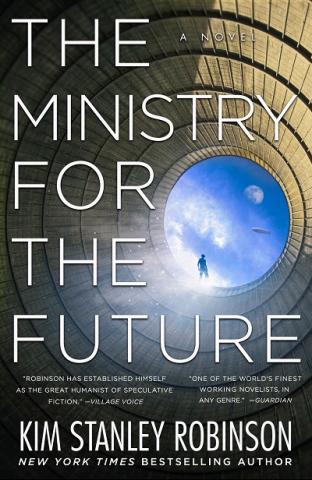 Kim Stanley Robinson's next novel, The Ministry for the Future, is coming on October 6th 2020. Hachette/Orbit published the synopsis:

The cover was revealed in a KSR interview with Newsweek. HQ image here; cover design by Lauren Panepinto. A silhouette inside the structure of an airship, a tunnel at the end of which the sky is beautiful, hope and struggle: "light at the end of the tunnel—the possibility of getting into a new open field of possibilities".

KSR talked about the new novel more in depth in an interview with Tor.com.

In some ways I guess you could say that The Ministry for the Future is describing a new few decades that if enacted by the world community, would possibly dodge the bad parts of the futures I wrote about in New York 2140 and 2312. In all three books some people are trying to do things to get people into a better balance with Earth’s biosphere, but the earlier we start doing that in a big way, the less remediation and catching up we’ll have to do.

So the new book has the most intense focus on what we could do right now, and it plays off the creation of the Paris Agreement, which was a major event in world history.

KSR teases the topics to be covered in the new novel in his new monthly column in Bloomberg Green (of all places!). And the solutions are specific, concrete, immediately applicable. First, on the role of central banks in mobilizing resources for climate change adaptation and mitigation: Making the Fed’s Money Printer Go Brrrr for the Planet:

We have to save the biosphere from catastrophic heating. We also have a market that won’t invest enough in this project. So governments need to do it, by way of creating new money specifically targeted to pay for rapid decarbonization. You can think of this proposal as “carbon quantitative easing,” in tribute to the quantitative easing undertaken by central banks in the teeth of the 2008 recession.

And second, on the jobs market and opportunities that come with making the world a more liveable place: The Climate Case for a Jobs Guarantee:

Never make the mistake of thinking “efficient” is synonymous with “good.” All kinds of bad things can be achieved efficiently. Efficiency just means the most results with the least waste, so whether it’s good or not depends entirely on the desired goal. If the goal is prosperous people living in balance with a healthy biosphere, then a Job Guarantee, targeted at rapid decarbonization, habitat restoration, regenerative agriculture, and similarly necessary work, might be the most efficient course. If anyone doubts this, one has to ask first, are they doubting the method’s efficiency or the primacy of the goal itself?

Any resemblance to policy packages for a just transition to a low-carbon world, to many variants of the so-called Green New Deal, are not fortuitous. On the occasion of a public assembly in New York City last November organized by Columbia University's Buell Center for the Study of American Architecture, KSR wrote a piece on the Green New Deal -- the House Resolution itself, sponsored by Rep. Ocasio-Cortez, and the idea, or ideas, of a Green New Deal as a tool to steer our efforts as a civilization towards justice and sustainability.

The writers of H. Res. 109 are to be congratulated. It’s notable that [...] they have decided to make human justice and equity major parts of the climate change mitigation project. [...] the seemingly permanent systemic injustice of American society, and the increasing inequality of the last few decades, are acknowledged and also tightly bound to both the explanation of the climate problem and the prescriptions for solutions.

[...] It’s thus possible to imagine a ‘successful’ but nevertheless dystopian response to climate change, in which democracy and people more generally are not trusted to be adequate to the emergency, and authoritarian or totalitarian governments must then attack the problem of technology transfer using ordinary people as shock troops to be sacrificed for a higher cause. [...] Against this bad scenario, the writers of H. Res. 109 have taken great pains to emphasize that any truly successful coping with the climate emergency will have to regard everyone involved as equally important.

Meanwhile! A few things have been going on that have made reality look even more like a science fiction novel! Kim Stanley Robinson wrote an essay for The New Yorker, "The Coronavirus is Rewriting our Imaginations", on how this coronavirus epidemic is changing our relationship to the future and how such a pause to rethink things and act in coordination is welcome.

For the past few decades, we’ve been called upon to act, and have been acting in a way that will be scrutinized by our descendants. Now we feel it.

We’re now confronting a miniature version of the tragedy of the time horizon. We’ve decided to sacrifice over these months so that, in the future, people won’t suffer as much as they would otherwise. In this case, the time horizon is so short that we are the future people. It’s harder to come to grips with the fact that we’re living in a long-term crisis that will not end in our lifetimes. But it’s meaningful to notice that, all together, we are capable of learning to extend our care further along the time horizon.

My younger son works in a grocery store and is now one of the front-line workers who keep civilization running. My son is now my hero: this is a good feeling. I think the same of all the people still working now for the sake of the rest of us. If we all keep thinking this way, the new structure of feeling will be better than the one that’s dominated for the past forty years.

It was a seminal essay that was widely quoted around (just a sample: Arianna Huffington, Financial Times, the deputy Prime Minister of Malta, Resilience.org...). It resonated with many people thinking that this can be more than a momentary tragedy, that this can be an opportunity for accelerating change in a direction that is also good for society as a whole and the environment.

And so with a significant share of the world population in various stages of quarantine, it was time for introspection and for reconsideration of our relationship with nature and our conception of future possibilities. Accordingly, several KSR novels found their way in articles on quarantine reading lists! The New York Times and Entertainment Weekly (!) included New York 2140, GQ included Red Mars, Vulture included The Years of Rice and Salt.

Locus Magazine has a report from a memorial in January for Michael Blumlein, fellow SF author and personal friend of Stan's, who died last October, where Stan read some Gary Snyder.

A local TV report from the Boston SF convention, Boskone 57, where Stan released his special collection of fiction and essays, Stan's Kitchen: A Robinson Reader (with an introduction by Michael Blumlein). Here he talks about the SF community (geoblocked; non-US visitors might be able to see it following this link).

The Coode Street podcast interviewed Stan once more, and he shared his thoughts on some recent readings of his, like Hilary Mantel's The Mirror and the Light trilogy on Thomas Cromwell.

More news will be coming as we approach the release of The Ministry for the Future!