Moholes were artificial shafts created on Mars during the 21st century, for purposes of heat release, as projects part of the terraforming effort. It was calculated that they contributed to about a 5 degrees K rise to mean temperature. A side benefit to their creation was ore mining.

Moholes were attempted on Earth in the 1961, with funding by the National Science Foundation[1]. Their name is a portmanteau of "hole" and "Moho", the shortened name of the Mohorovičić discontinuity, being the frontier between the Earth's crust and the mantle.

A mohole was a great cylindrical excavation in the Martian regolith that could reach hundreds of meters in diameter (typically one kilometer) and several kilometers in depth (as much as 18 kilometers).

As a result of its great depth, pressure at its bottom was superior to the surface's and temperature could largely surpass 273 K (for example 49 °C at the bottom of the Senzeni Na mohole midway through its construction), which provided a working environment more adapted to human life. The excavation for its construction brought to the surface ore that could be processed to valuable metals. The resulting temperature and pressure differential with the surface was such that moholes were natural heating systems and passive atmospheric ventilators, thus contributing to terraforming. Heat was released to the atmosphere in the resulting outgassing and violent updrafts were created, sending air higher than the average Martian lower atmosphere's thickness. The white thermal plume and resulting cloud would be visible from over 200 km alway. Moholes would be dug in proximity to volcanic uprises, so as to catch the wind updrafts and increase the release of heat. Downwind from a mohole, the air would be clear. 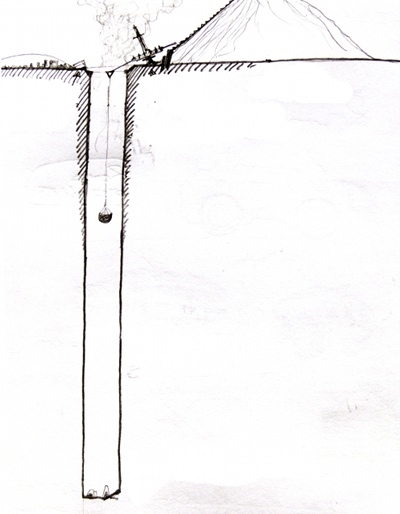 Artist's depiction of a section of a mohole, with mound on the top right

A two-laned road was dug into the walls in a spiral large enough to allow circulation of the giant automated dump trucks; the trip from the surface to the bottom could take over five hours. For manned transport, a series of caged elevators were adapted (a trip to the bottom of a mohole would count over seven successive elevators).

Close to the top, the mohole was beveled and a 200m-wide concrete band at a 45° angle separated the shaft from the surface. A high wire fence circled its outer edge and a 1km-long curving road cut into the concrete led to the mouth of the mohole proper. The mohole was surrounded by parking lots, garages and warehouses close to its rim to shelter the robot vehicles and their fuel; there were also walktubes, small tents and the factory apparatus that ran the operation. The mohole operation, digging and hauling the rock to the surface, was almost entirely automated, and so was most of the security (alarms and AI-operated locks); personnel was mainly needed only for programming and maintenance.

The view from any point of the mohole was impressive.

RM 267: Russians staging Hamlet in pressure suits at the bottom of the Tyrrhena Patera mohole, a production that struck John as crazy until Hamlet caught sight of Claudius kneeling to pray, and the camera tilted up to show the mohole as cathedral walls, rising above Claudius to an infinitely distant shaft of sunlight, like the forgiveness he would never receive.

BM 330: The lights on the mohole's bottom looked like stars seen through the planet. Art was petrified, not at the sight but at the very thought of the sight, and he would not go near that half of the room. Nadia laughed at him, and then when she was done looking, closed the drapes.

The rock dug up from the creation of the mohole would create large mounds next to them. The Sabishiians famously shaped theirs into snaking mounds that looked like a dragon from above, and dug tunnels, rooms and shelters inside them. The rock could also be processed for trace amounts of valuable metals.

Tented cities would be created next to moholes, which were employment and activity centers. Sometimes the city predated the mohole, such as in the case of Sabishii.

Several moholes were abandoned or decommissioned after the First Martian Revolution of 2061. The moholes as a terraforming option were abandoned altogether towards the end of the 21st century, as other solutions were implemented, such as the aerial lens.

Artist's depiction of the inside of a mohole

The moholes created were at least 12 (most likely exactly 12): one near the North Pole, three around the 60° latitudes North and South, four along the equator and four around the 75° South latitude close to the South Pole[2]. They are[3]:

[1] Description of Project Mohole, 1958-1966, on the National Academies
[2] RM 279, GM 43
[3] In the map in GM 36, the four moholes around the South Pole are named: Lyell, Vishniac, Jeans, Playfair. However the narrative makes it clear that one of the four should be Rayleigh mohole, with a fifth mohole in lower latitudes north of Rayleigh. For this list, precedence has been given to the text and the Playfair and Jeans moholes, never referenced in the text, are not listed.