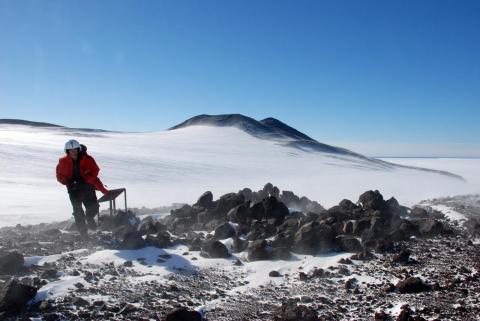 New York 2140, Kim Stanley Robinson's latest, his 18th novel, just came out!
Pictured above: KSR in Antarctica, from his second NSF-sponsored trip in 2016 (the first one in 1995 gave birth to the novel Antarctica). This is him reaching the Wilson rock hut on Igloo Spur, at Cape Crozier on Ross Island. It was built in 1911 to shelter Wilson, Cherry-Garrard and Bowers during the so-called "Worst Journey in the World", one painful episode that is part of the ultimately failed British expedition led by Scott to reach the South Pole. KSR's own account of his journey and reflections on the 1911 journey are upcoming.
First, KSR interviews on and around NY2140. Some generic setting and characters spoilers.
In this very quotable interview for Scientific American, KSR summarizes what the new novel is about thusly:

It’s about climate change and sea level rise, but it’s also about the way that our economic system doesn’t allow us to afford a decent future. As one of the characters says early in the book, “We’ve got good tech, we’ve got a nice planet, but we’re fucking it up by way of stupid laws.”
Finance, globalization—this current moment of capitalism—has a stranglehold on the world by way of all our treaties and laws, but it adds up to a multigenerational Ponzi scheme, an agreement on the part of everybody to screw the future generations for the sake of present profits. By the logic of our current system we have to mess up the Earth, and that is crazy. My new novel explores this problem and how we might get out of it.

KSR goes on about the climate science, the fact that he hasn't actually lived in New York, about post-2008 leftist thinking and the meetings he's had that have shaped his thinking on economics and political economics.

Life is robust. Everything is robust—except the current economic system. So let’s reform that, revise it to something more intelligent and generous. That’s my hope—and it doesn’t hurt that it lets me tell a lot of fun and interesting stories.

KSR reminisces on his two Antarctica trips, tells us how he sank Manhattan and muses on life in Davis, California, in this profile and interview for Sacramento Town Magazine: "The Man Who Feel For Earth" -- complete with drawn portraits! (Also included an interview with Mario Biagioli, advisor on this novel but also in Galileo's Dream; Karen Joy Fowler, fellow SF writer, they were writing sitting in the same café for years; and novelist Jonathan Lethem) One gets a very good sense of how Robinson plans and executes his writing and who he is as a thinker and human being, an excellent resource. Picked bits:

“It’s the same structure that Dickens uses in Bleak House,”
“I spent a night in the old MetLife building,” he says, speaking of what is now the Edition hotel, “and one of the customer relations people showed me everything from the very top of the steeple to the bottom of the basement. I felt like I knew the building.”
he has only engaged in politics actively once. “I tried to [fight] UC Davis when they were trying to turn some of their agricultural research fields into their own private faculty suburb [in 2004],” he recounts. “That was painful and made me late on my books. I’ve decided that really I’m best off writing my books and making them be political activism.”
The apocalyptic vibe in the climate change movement is because people are so scared by what looks pretty damn bad, but so many good things are happening, too. I have been fighting this fight as a public intellectual, as a novelist and someone giving talk after talk after talk, since about 2002. I’ve seen huge changes in public acceptance. The speed at which clean technologies are being taken up is doubling, and that quickly makes huge differences.

Given the financial and Wall Street connections of New York 2140, Bloomberg took an interest in KSR (!) and published this article on him, a mix of career profile, interview, novel presentation and a nice illustrated visualisation of the novel's setting.
More NY2140 (read: Terra2017) musings in this interview for the Chicago Review of Books:

I think it is a hopeful novel. The future we’re headed into will include climate change to one degree or another (ha ha), and it’s also going to include finance, which in a complex society is just one aspect of everyone getting along. Finance is never truly unfettered, in that it’s always regulated, but the regulations can and do privilege certain stakeholders over others. The other stakeholders include other living creatures on the planet. They keep us alive, but can’t exactly speak for themselves in our legal decisions and law-making. We have to figure out how to create justice and sustainability for them as well as us, as they’re part of us. We all together need sustainable justice.
I often start with ideas that are global or historical or scientific that don’t have any characters in them at first, and then as I write, the characters appear and become more distinct, and do things—it’s a strange process, and I don’t feel in control of it. So that’s very interesting. It keeps me writing.

In this interview for Singularity Hub, KSR talks about his trip in Antarctica and writing NY2140 as a novel of realism:

“Optimism is a political position, to be wielded like a club. It’s not naïve and it’s not innocent. … [O]ptimism is a moral and political position. It’s a choice made to insist that things could be better if we worked at it. [Italian neo-Marxist theorist Antonio] Gramsci suggested this with his motto, ‘Pessimism of the intellect, optimism of the will.’ “This is just one moment in a long battle between science and capitalism. That’s the story of our time, and the story won’t end in our lifetime, but we can pitch in and make a contribution toward the good, and I trust many people will. Is that optimism? I think it’s just a description of the project at hand.”

Another interview for iDigitalTimes on NY2140. Some quotes:

Capitalism and the profit motive are in some kind of competition with science and utopian thinking, in determining what happens to us both technologically and socially. So there again it’s an interaction, maybe a struggle for control. Ultimately we decide what we want in a big amorphous process we call history.
[Wealthy industrialists] want to perpetuate their power, and as a class they’re therefore dangerous and need to be legislated into harmlessness. I’d like to see individual income taxed as progressively as in the Eisenhower administration, and then also see corporate assets taxed in a similar fashion, as suggested by Thomas Piketty. Then the wealthy would have enough to be comfortable, but not enough to try to buy the political system.
My feeling is that evolution is more likely than revolution, so what we need to conceptualize is very rapid evolution. [...] I think it’s better to go immediately to work on all possible reforms and evolutionary changes, than it would be to declare the situation so bad that we need a revolution if we’re going to succeed.
The book was mostly written in 2015 and the first three months of 2016, so for the most part its thinking predates the current situation.
New York pizza is like the shark or the cockroach, and having achieved perfection in its ecological niche it will persist in its current form for the next 350 million years.

Also of interest: IDT fellow site International Business Times also published a separate interview with KSR on Aurora.
Further details on how NY2140 came about in this interview for the Sierra Club:

I went to my editor, Tim Holman, and said, “I want to write about global finance.” He said, “Oh God, never say that again. Horrible idea.” And I said, “But I want to do it.” So he thought for a while and said, “Well, remember that drowned Manhattan from your [science fiction novel] 2312? If you want to do finance, New York is the logical place to do it. Could you put the book in that drowned Manhattan?” In terms of picking the time, it was just a matter of making it far enough off that the sea level rise could be justified but close enough that we still have the current set of problems. You will the optimism as a political weapon to keep yourself active. It’s not easy, and it’s definitely not automatic. It’s more like, “Goddammit! I’m gonna stay optimistic!”

Reviews for NY2140 have started pouring in. Again, mild spoilers warning.
Gerry Canavan for the Los Angeles Review of Books, with the bold title "Utopia in the Time of Trump". A heartfelt review from somebody very knowledgeable in Robinson's entire body of work.

It is undeniably clear that Robinson’s project has become the construction of a huge metatextual history of the future [...] each new Robinson book comments on and complicates the vision of the future espoused by earlier ones, typically by refocusing our attention on some heretofore overlooked component of the problem. [...] New York 2140 remixes many of Robinson’s key futurological themes, once again with a significantly more pessimistic orientation. [...] I felt for a bit reading New York 2140 that perhaps it was no longer right to call Robinson our last great utopian visionary, as he is so often described; maybe even Stan has finally wised up and realized we’re all doomed.

Adam Roberts for The Guardian:

This is a large-scale novel, not only in terms of its 624 pages, but also the number of characters and storylines Robinson deploys, the sheer range of themes and topics. [...] This range and variety make summarising the plot a tricky business. Lots goes on. Robinson is not a writer who does villains; none of his characters here is evil, although some are grubbier and more compromised than others. The villain in this novel is capitalism itself. [...] New York 2140 is a towering novel about a genuinely grave threat to civilisation. Impressively ambitious, it bears comparison with other visionaries’ attempts to squeeze the sprawl and energy of the US between two covers: John Dos Passos’s USA trilogy and Don DeLillo’s Underworld.

Others:
More interviews and reviews are coming, as could be expected!