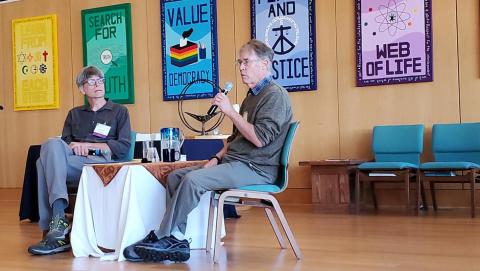 The world turns and I'm back with another impressively long list of links on everything KSR!

Because not much is left in the budget, individual choices are worth thinking about and then changing.

[..] There’s even danger that raising the question of how we live risks shifting the burden of change away from governments and corporations. That’s why the fossil fuel industry was the first to promote the individual “carbon footprint,” rather than face the poisonousness of its own product.

It’s also true that individual action can do only so much to decrease the carbon burn of civilization, given its current infrastructure. An individual’s most powerful form of action remains politically supporting laws to curb emissions. It’s usually not very hard to figure out which politicians will do this. These are the real levers of effective action for individuals in our time: mobilization, solidarity, political mass action.

[...] So pay attention; feel your body; think it over. Be mindful of your carbon burn, and make what you burn really count. Don’t waste it. We’ve been cocooned in fossil fuels for too long, and busting out of that sheath of crap back into the wide world will be a liberation.

KSR was interviewed by James Bradley for the collection Tomorrow's Parties, edited by Jonathan Strahan, with "Twelve visions of living in a climate-changed world" consisting of short stories, artwork, and the KSR interview. The interview itself is available:

So “2312” was written in 2010. In that novel, I provided a timeline of sorts, looking backward from 2312, that was notional and intended to shock, also to fill the many decades it takes to make three centuries, and in a way that got my story in place the way I wanted it. In other words, it was a literary device, not a prediction. But it’s interesting now to look back and see me describing “the Dithering” as lasting so long. These are all affect states, not chronological predictions; I think it’s very important to emphasize science fiction’s double action, as both prophecy and metaphor for our present. As prophecy, SF is always wrong; as metaphor, it is always right, being an expression of the feeling of the time of writing.

So following that, “The Ministry for the Future” was written in 2019, before the pandemic. It expresses both fears and hopes specific to 2019 — and now, because of the shock of the pandemic, it can serve as an image of “how it felt before.” It’s already a historical artifact. That’s fine, and I think it might be possible that the book can be read better now than it could have been in January 2020 when I finished it.

Now I don’t think there will be a period of “zombie years,” and certainly not the 2030s. The pandemic as a shock has sped up civilization’s awareness of the existential dangers of climate change. Now, post COVID, a fictional future history might speak of the “Trembling Twenties” as it’s described in “The Ministry for the Future,” but it also seems it will be a period of galvanized, spasmodic, intense struggle for control over history, starting right now. With that new feeling, the 2030s seem very far off and impossible to predict at all.

KSR was, once more, interviewed by Jacobin: "We Need Democratic Socialism"

That being the case, maybe now we can say this: we need to pressure our political representatives to do the right things for us and the biosphere. Mass demonstrations, either entirely peaceful or with a violent edge, seem to me appropriate now. The failure of the Biden administration’s Build Back Better act is not an indictment of that administration, but of the US electorate and political class; we should have elected a real working majority. Missing by one vote does not invalidate the goal or even the method; we need more votes in the Senate to get a true working majority. Then that majority has to legislate and pass the legislation. That’s one obvious tactic. I also think that breaking machinery in ways that don’t hurt humans may be appropriate.

[...] So, what I wanted to imagine in my novel is not any particular political formulation, but rather a messy and yet effective swerve away from a mass extinction event, which means, as a first step, away from neoliberal capitalism. One step at a time:  I think we need first a refusal of austerity and neoliberalism, by way of Keynesian stimulus; then social democracy; then democratic socialism; and then on from there.

KSR appeared on the VERGE 22 event and spoke on a panel together with Delton Chen.

KSR appeared on the Factually! podcast with Adam Conover to talk about The Science Fiction of Climate Change.

What was your rationale for putting central banks at the heart of a near-future novel about climate change?

A couple of factors. One, the job of rapid decarbonisation of our civilisation, and all the other things we need to do to dodge the mass extinction event we have begun, is really immense. It will therefore take a huge amount of money, representing human time and effort.

Also, a lot of this work isn’t necessarily profitable. Individuals are not clamouring to buy what is in effect a giant sewage system for the world, even if they like the idea of the result. Put these two factors together and we’re in big trouble, which we are. The central banks, being the creators and guarantors of money itself, need to be involved if we are to succeed.

KSR appeared on the The Laura Flanders Show (video).

KSR was interviewed by the Between the Covers podcast special on "Crafting with Ursula [K. LeGuin]".

Also included: an excerpt from The Gold Coast; and "Why I Write: An Acceptable Degree of Coherent Narrative", a KSR piece directly adapted from his short story A Sensitive Dependence on Initial Conditions.

The book club was capped by a conversation between KSR, Cory Doctorow and host John Freeman. A recap of the event is available, as well as a full transcript.

It turned into one of the most autobiographical novels that I ever wrote. And that's usually dangerous ground for me. I wouldn't recommend it. But this particular novel being the entirety of my 20s as written from my 30s, I was pleased with it that when I was done for one thing, the plot is a kind of a train wreck where the readers can see the train wreck coming, but none of the characters can.

[...] So there you have dystopia with ordinary people.

[...] Yeah, Jim McPherson, Kim Robinson, I went to McPherson High School. It's not particularly disguised that this is a novel about my earlier self and Jim is not a very good poet that was easy to imagine and becomes a kind of historian and doing prose poems, which is also something that maybe was speaking almost to my future self in the way that I was trying to do the rest of it. But Jim's recovery of Orange County's history, which is completely obscured and at first looks minor league indeed is really one of the things that pulls him out of the strange and shallow and kind of screwed up world that he's in at the time. All that, along with his trip to the Sierras with his friend Tashi, all that happened, I can say that.

Ministry for the Future

Three chapters from MftF were included in "No More Fairy Tales: stories to save our planet", "an anthology of 24 top climate solutions wrapped up in engaging stories" that was also distributed to the thousands of delegates and attendees of COP27. This is an initiative of The Green Stories Project, in association with Herculean Climate Solutions. (Note: these were chapters 42 on the carboni coin; 22 and 93 on slowing down glaciers melting.)

Ministry for the Future reviews:

Parade included MftF in its list of the 222 best books of all time (!).

It was also in the Indie SciFi/Fantasy Bestseller List (US-wide independent bookstores).

Articles related to or that make reference to MftF:

Richard Powers was awarded the 2022 Fitzgerald Award. Kim Stanley Robinson participated in a “Tribute to Richard Powers”, discussed with Powers in a “Conversation about the Art of Fiction” and introduced him to the award. The tribute recording is available online. File770 reported from the event.

KSR spoke at the opening of the exhibition "Science Fiction: Voyage to the Edge of Imagination" at the London Science Museum. New York 2140 is featured in the exhibition.

Mathias Thaler, from the University of Edinburgh, published "No Other Planet: Utopian Visions for a Climate-Changed World", particularly focusing on works by N. K. Jemisin, Kim Stanley Robinson and Margaret Atwood.

Finally, I'm no longer on Twitter, but there's a new @KSRQuoteBot with "Daily quotes from the modern sci-fi author!"

(Photo: Powers and Robinson at the Fitzgerald Literary Festival)