The Blind Geometer is a novella written by Kim Stanley Robinson. It was first published in 1986 in a limited number of copies; after also being published in magazines, it was notably published as a paperback collected with Robinson's short story "The Return from Rainbow Bridge" and Ursuka K. Le Guin's novella "The New Atlantis" in 1989.

It is about a blind geometer being manipulated by his colleagues, the love story that ensues, and the geometer's thoughts about blindness and the resulting comparative advantage in his perception of the world and of his mathematical expertise. Mathematics and geometry play a central role in the plot.

Carlos is the titular blind geometer. His disability led him to be interested in abstract representations of spatial relationships, and this led him to work, since 2043, at George Washington University, in n-dimensional manifolds. He also likes to ponder and make parallels between the mathematical language and the spoken language (or even the language of the senses) and about the relationship between events that shape one's life and geometric forms.

He is introduced by his colleague Jeremy to Mary, who he is told is key to a mysterious event of great importance at the level of national security; Mary is incoherent and presents Carlos with a geometric form: Desargues' theorem; Mary seems to want to communicate via touch. Carlos has his suspicions and finds his talks with Mary are under surveillance; underestimated by Jeremy and his associated because of his disability, Carlos discovers he is being manipulated. Carlos and Mary begin a relationship and Carlos learns the truth: Mary was heavily drugged so as to have Carlos share his knowledge in the transfer of energies between microdimensions; Jeremy is involved in a secret para-governmental group aiming to create a particle-beam weapon.

Carlos is followed into his office by three ill-intentioned men. He shuts down electricity to bring his assailants to the same level of blindness; he is able to resist them until, discovered by the flame of a lighter, he is saved by the intervention of Mary. As she recovers from her wound and behavior programming, their love grows.

The Blind Geometer is narrated in the first person by Carlos, and hence there is an increased use of imbricated parentheses, square brackets and braces in sentences (as the relationship between mathematical and spoken [or written {for that matter}] language is a theme of the work).

Two figures illustrating Desargues' theorem are inserted in the text. 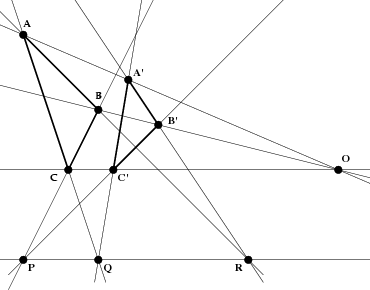 Chapters are named after letters denominating points in the figures of the theorem. Interestingly enough, Mary's attempts at communicating with Carlos involved making parallels between geometrical figures and persons and relationships: Carlos and Mary were the perspective triangles ABC and A'B'C', respectively, and Jeremy, who was manipulating them, was the projection point O. Thus, chapters are named using these parallels: eg OA for a Carlos-Jeremy scene, or AA' for a Carlos-Mary scene, or AB for Carlos' thoughts; C chapters are special chapters expressing Carlos' quintessential thoughts nearly independent of the rest of the narrative. The work ends with a PQR chapter, which is the points Desargues' theorem is about.

The "spy stuff" theme of The Blind Geometer is also encountered in the Science In The Capital trilogy.

Also, the walls of the gym covered in uncanny newspaper articles resembles the wall of the "Department of Unfortunate Statistics" in the Science In The Capital trilogy.

The Blind Geometer won the 1988 Nebula award for novella, and was nominated for the 1988 Hugo and Locus awards for novelette.