"SHAMAN", or rather "Shaman: A novel of the Ice Age", has a synopsis:

An award-winning and bestselling SF writer, Kim Stanley Robinson is widely acknowledged as one of the most exciting and visionary writers in the field. His latest novel, 2312, imagined how we would be living 300 years from now. Now, with his new novel, he turns from our future to our past - to the paleolithic era, and an extraordinary moment in humanity's development. An emotionally powerful and richly detailed portrayal of life 20,000 years ago, it is a novel that will appeal both to his existing fans and a whole new mainstream readership.

From a short interview in the Sacramento Bee, Stan said:

I'm finishing a novel set in the ice age, about the people who made the paintings in the Chauvet-Pont-d'Arc Cave in southern France, about 32,000 years ago. I do a lot of snow camping in the Sierra, and I put my snow knowledge into it and tried to explain how we became who we are now. It's only science and archaeology that allow us to write historical fiction with any accuracy. So it's kind of science fiction in a way.

Kim Stanley Robinson's latest novel, 2312, has been nominated for the year's British Science Fiction Award for Best Novel! We wish it the best.

2312 continues to collect some excellent reviews as time goes by and more people absorb the tons of layers and issues it tackles.

Robinson confronts the stark divide between those who enjoy the privilege of becoming utterly free and those who don't—caught in the meshes of history that won't allow everyone to go their own way. Swan, during a visit on Earth, rails at the people in a bar in Ottawa, "We're on Earth! You have no idea what a privilege that is. You fucking moles! You're home! You can take all the spacer habitats together and they'd still be nothing compared to this world! This is home" (p. 418). Swan actually uses the word "privilege," which by this point in the novel can only strike readers as painfully ironic. The privileged mostly don't live on Earth, but in space habitats. Earth represents misery and squalor and social and ecological devastation that can't be escaped. Swan doesn't understand this difference except in the most abstract terms.

Stan was interviewed for the British Interplanetary Society's e-magazine, Odyssey (Issue 24). Odyssey is available via subscription to the BIS. Still, here's a short bit to hook you:

Which character from the Mars trilogy do you most resemble?
If any, which I doubt, it would surely be one of the more boring secondary characters, like Art. There isn’t anyone in that story based on someone like me, which is something I’ve done in some other books of mine. I’m sure the Mars books are better off because of that. 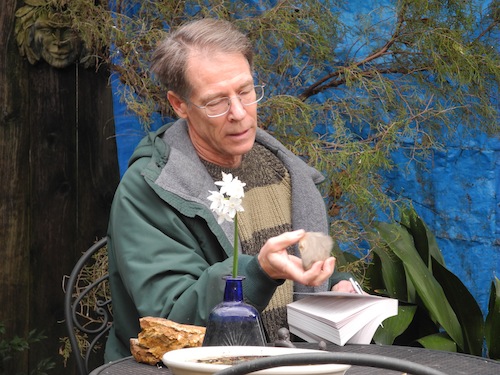 In a series on Creating the Future, Mendelspod features a great interview with Stan, by Theral Timpson, who also wrote an article to accompany the interview, available in both video and audio, conducted in Stan's home in Davis, CA. Pictured above: Stan at his writing table at his home. What he holds is probably the Acheulian axe from Fifty Degrees Below... and I suppose from Shaman too!

I haven’t read or met many sci-fi writers with whom to compare Robinson, but he, and his writing, strike me as very grounded. [...] He was eager to show us his writing station located outside his front door, where he writes, rain or shine, warm or cold.

This very interesting interview covers: "How do you choose date and time? ; We live in a science fiction world ; Who's creating the future, the scientists and engineers, or the sci-fi writers? ; The philosophical battle between science and capitalism ; How does one go about creating the future on paper? ; Is science becoming too much like a religion? ; Fiction is the steady instrument, science is what evolves ; On which planet or astroid or community from your novels would you most want to live?" and a reading from 2312.