SHAMAN just came out, September 3 2013; but before the host of interviews and readings that that one will involve, some non-Shaman material:

Adam Ford recently interviewed Robinson for 33rd Square (probably during the Humanity+ event last December). This resulted in a fascinating interview where Robinson discusses many of his ideas and worldviews, from science fiction, transhumanism and the role of technology to optimism, Buddhism and self-actualization. It is well worth your time and summarizes many of his interviews in the past few years. The interview is on YouTube in 5 short parts, below is Part 1:

Kim Stanley Robinson is featured on the very KSR-focused cover of the August 2013 issue of Locus Mag. The magazine features a conversation with Stan, "Making Worlds". 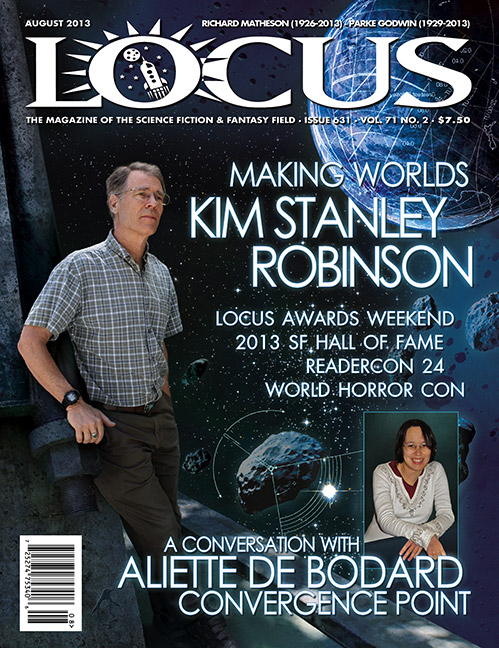 From the beginning of my career, I’ve done the Solar System set a few hundred years in the future. So for this new one, I stole from myself: the city of Terminator on Mercury comes from The Memory of Whiteness. But when I tried to describe the rest of the Solar System, it began to get so detailed it was goofy. That was when I thought of Stand on Zanzibar by John Brunner, and how he had used John Dos Passos’s USA Trilogy methodology. My lists, extracts, and quantum walks all have their equivalent in Dos Passos. Using his method clarified things a lot. With it, I could tell the lovers’ story, and the mystery they’re involved in, and all the rest of it. Instead of using the typical expository lump, which is the famous problem of science fiction writing (and I’m often criticized for being a monster in that regard), I was able to chop the exposition into little bits, make it more something like little prose poems scattered through the text. It’s sort of an internet version of the Encyclopedia Galactica of the 1950s, which I think was one of the things people loved about science fiction, actually: learning about a far-flung civilization by way of direct description. But my impression now is that a lot of new readers don’t remember Stand on Zanzibar, and never read the USA Trilogy, so they think I’ve done something new and peculiar. Some have complained, but I feel those people are a little too narrow-minded about what the novel can be. 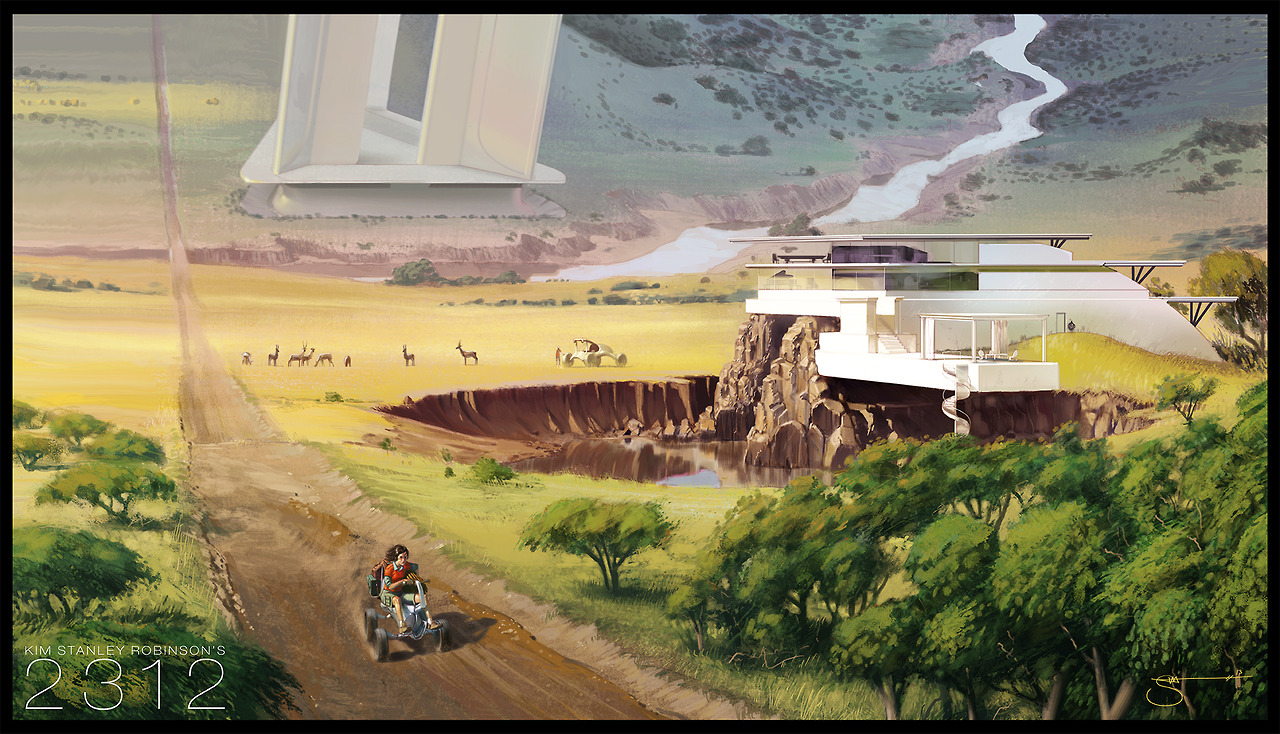 On the Huffington Post, Rabbi Lawrence Troster ponders about climate change activism (Climate Reality Project) and the historical period in 2312 that Robinson termed "The Dithering", 2005-2060, during which political lockdown and behavioural inertia resulted in a lack of action against climate change.
Some more 2312 reviews: Ancient Logic | City of Tongues
Some recent events:
Robinson was at the WorldCon in San Antonio, Texas, from August 29 to September 2, 2013: "LoneStarCon 3". The Hugos were announced there, but 2312 did not take the win.
Barnes & Noble SHAMAN reading & signing in San Antonio, Texas
Tuesday, September 3, 7 p.m.
Author Event: Kim Stanley Robinson
The New York Times bestselling author will make an appearance at Barnes and Noble San Pedro (321 NW Loop 410 suite #104) for his novel, “Shaman.” Robinson is most known for his Mars-trilogy which has won many awards including the Nebula Award and the Hugo Award.
For more information, visit barnesandnoble.com.
Some upcoming events:
Barnes & Noble SHAMAN reading & signing in Dallas, Texas -- TODAY!
Author Event
Kim Stanley Robinson, the bestselling author of science fiction masterworks such as the Mars trilogy and 2312, will be joining us to discuss and sign his new novel Shaman, a powerful powerful coming of age story set 30,000 yrs ago. Come meet the author!
Wednesday September 04, 2013 7:00 PM
Lincoln Park, 7700 West Northwest Hwy. Ste. 300, Dallas, TX 75225, 214-739-1124
Robinson will be a speaker at the Library of Congress in Washington DC on September 12 2013, on "The Longevity of Human Civilization: WIll We Survive our World-Changing Technologies?"

Will human civilization on Earth be imperiled, or enhanced, by our own world-changing technologies? Will our technological abilities threaten our survival as a species, or even threaten the Earth as a whole, or will we come to live comfortably with these new powers? Baruch S. Blumberg NASA/Library of Congress Chair in Astrobiology David Grinspoon convenes scientists, humanists, journalists, and authors to explore these questions from a wide range of perspectives, and to discuss the future of human civilization in an anthropocene world.

Robinson will also be participating at A Science Fiction Symposium at Williams College in Massachussetts on October 24:

Please join us on October 22nd, 23rd, and 24th for a Science Fiction Symposium that will include readings, panels, and lectures by leading writers and thinkers from across the United States. October 24th will include a panel discussion as well as a 4pm Reading.  Participants will include Samuel R. Delany, Kim Stanley Robinson, Elizabeth Kolbert, David Hartwell, Paolo Bacigalupi, William Gibson, Terry Bisson, and John Crowley.  More information will be coming soon.  Sponsored by the English Department, The Margaret Bundy Scott Fund, American Studies, Environmental Studies, Africana Studies and the Oakley Center.

Stanley Von Medvey also has some concept art of Swan: