The Ares was the spacecraft in which the first expedition to establish a colony traveled to Mars in 2026. 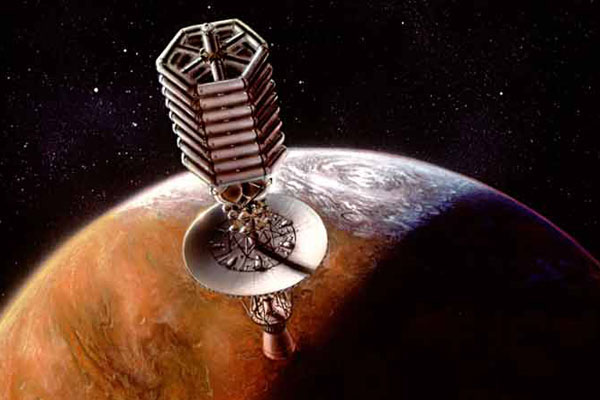 The ship was constructed in Earth orbit by assembling empty external fuel tanks from American and Russian space shuttles, which would also serve as landing ships, thus cutting costs compared to constructing a ship entirely out of dedicated parts. This and the repetitive nature of this construction method allowed the Ares to be completed in less than two years.

An immense ship for early 21st century standards, its primary living space was composed of eight hexagons, and each hexagon composed of six connected hollow cylinders, which previously were the fuel tanks. These eight toruses, ranging from Torus A to H, were speared down the middle by a central hub shaft. At the aft end of the shaft were the fuel tanks and main propulsion system. The front end led to a section with a bubble window, which permitted views of the stars and a partial view of the ship behind.

As a whole, the ship slowly rotated around the axis of the central shaft, providing about .38 of Earth's gravity (or Martian gravity) to the toruses.

The entire ship's living space equated to about the living area of a large city hotel. Each torus was filled with different systems: dining halls, living quarters, a farm, and even a strolling garden.

The Ares began its journey towards Mars on December 21st, 2026, by an acceleration which broke it free of Earth's orbit. It was a nine month journey.

Life on the Ares

The crew was in contact with NASA's Mission Control in Houston, USA, which was headed by Derek Hastings at the time, and Baikonur, Russia.

Because of the paramount importance of the mission, interest for the First Hundred back on Earth was very high. The future colonists were filmed and the footage was sent back to Earth. Janet Blyleven was the one who handled these video feeds; she was oftentimes scorned upon by some of her peers who felt recording their daily routines and deeper thoughts was an invasion of privacy they did not desire.

A significant share of the time of the crew was spent in training simulations for the manoeuvres they would have to make in orbit and in landing; these were managed by Arkady Bogdanov.

The occupants of the ship would "dress" the walls of the toruses with boards. The boards were painted in seasonal colors and would provide a visual anchorage to the seasons back on Earth. In addition, the length of "days" and "nights" was changed through lighting and temperature was adjusted accordingly.

The group tending the farms, led by Hiroko Ai, was the most secretive. Unbeknownst to everybody else onboard, Hiroko had brought a stowaway on the Ares: Desmond Hawkins. Desmond, the First Hundred's 101st member, secretly lived in the farms, where people outside Hiroko's group hardly ever went.

The Christian Easter service was performed by Phyllis Boyle onboard, who was criticized for her faith by John Boone.

Maya Toitovna, head of the Russian section of the colony, began a relationship with Frank Chalmers, her American counterpart, which they kept secret.

As the distance with Earth increased, the time lapse in the communication with Earth became perceptible and brought home the reality of isolation to crew members. Groups began to form, exacerbated by the mix of American and Soviet nationals onboard and the status quo of the Cold War back home.

Four months into the journey, the crew was alerted by Houston of a solar flare powerful enough to create a solar storm of lethal radioactive levels within the Ares unless proper protective measures were enacted. Living organisms and sensitive equipment had to be put behind protective radiation barriers, such as water or thick layers of metal.

The farm animals were secured in protective quarters (Desmond was put among them) and sensitive equipment was enclosed in storage spaces. The entire crew gathered in the weightless, central shaft that was heavily shielded. Within that protected area, the crew had significant discussions ranging from their future communications with Earth to altering the entire plan and structure of the colony on the Martian surface. Most controversial topics were raised by Arkady, who suggested that the entire crew totally disregard all plans made for them on Terra. Some members agreed with him only in part, and others, such as Phyllis, flatly rejected Arkady's propositions.

In this one moment Arkady made evident thoughts that up until then had existed only within many crew members' heads. Thus began a debate about their collective futures that would foreshadow the direction some colonists would pursue later in their endeavor.

Prolonged isolation in a confined environment took its toll on the psychology of the crew; morale was low and arguments broke often. Tensions were somewhat eased when Maya and John began a relationship and in a highly political move made their relationship public knowledge.

Landfall assignments were decided upon during the journey. The Ares reached Mars orbit in circa September 2027. After aerobraking, they were in Mars orbit. They stored the heat shields and began organizing the disassembly of the ship. In a last dinner with all the 100 colonists gathered, spirits were high in appearances only. Again Arkady expressed his opinions on Terran control of Martian colonization, and some were angry at Arkady, and some were angry at others being upset. Teams boarded their assigned cylinders, which broke off into independent modules for landing. A part of the remaining ship took another two month journey to Phobos.