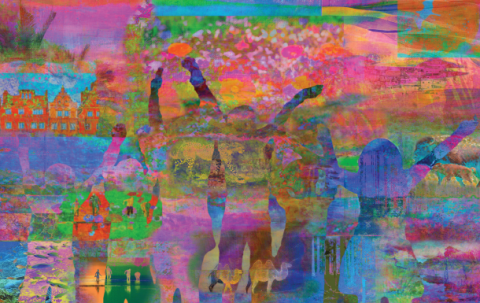 The Ministry for the Future has generated quite some buzz in wide-ranging circles, not only in the science fiction circles but also in anything from environmental activists and current event commentators to international institutions and in anyone who is interested in imagining alternatives. It was helped by KSR's appearance at the last COP but also by the current moment in public discourse, where it would appear we are at a turning point towards taking sustainability issues seriously, despite all odds.

Some more KSR interviews and podcasts before and after COP26:

At the 4th edition of the Paris Peace Forum: Engineered climate: The needed governance of Solar Radiation Modification (YouTube video)

At the Climate Crisis Advisory Group public meetings of January 2022: What needs to be achieved in 2022 to ensure a manageable future for humanity? (YouTube video)

At the Long Now talks: Climate Futures: Beyond 02022 (YouTube video) -- a great long-ranging talk as the Long Now series tend to be, on Ministry and its reception, on what KSR learnt from COP26, and more.

Of particular interest to Ministry and its focus on India, at the Jaipur Literature Festival ("the world's largest book show"), in conversation with writer Raghu Karnad: The Urgency of Borrowed Time. The recording is available on YouTube. The event generated some buzz in India: a report on Mint Lounge, another report on News9Live.

An Orbit Books discussion between KSR and science fiction writer Lincoln Michel about capitalism, climate change and the future of New York City.

At TYT's The Damage Report: A Climate Plan For A World In Flames (on YouTube).

At the Your Undivided Attention podcast: How Science Fiction Can Shape Our Reality.

At the Manchester Green New Deal podcast: Sci-Fi is a Metaphor for How Now Feels.

This website has existed for a while now -- all the links above and the list of past events KSR has participated in can be found at the Archive of Events page.

By the way, Ministry has been translated into Spanish (El ministerio del futuro, Minotauro) and German (Das Ministerium für die Zukunft, Heyne Verlag; includes a preview of the first 70 pages) -- at least!

Chapter 57 of Ministry was published on, quite fittingly, Anthropocene Magazine, and it is available to read.

And meanwhile, Matt & Hilary's podcast that is still called Marooned! on Mars has concluded 2312 and has begun its coverage of Green Earth!

Ministry reviews, in no particular order:

Book clubs! Ministry was selected by SciFiEconomics/Edgy Ryders, by Gaianism (where KSR also appeared, apparently), by the Albany Public Library and by Steamboat Pilot.

Ministry was in The Economist's best books of 2020. It was in Grist's reading list and New Scientist's reading list for climate fiction. It was in Otago Daily News' Top 10 of 2021 (New Zealand) and in Die Zukunft's best of 2021. It was recommended by New Scientist's Rowan Hooper, by Financial Times' Pilita Clark, by Radio West and by the McGill Reporter. It was on international bestsellers lists as well as California bestsellers lists.

Ministry also generated and inspired articles and thought pieces around the world. A non-exhaustive list and in no particular order:

That's "just" it, from what I could gather, on Ministry. Coming up in just two months, in May: KSR's non-fiction book on the Sierra Nevada, The High Sierra: A Love Story, by Little Brown!