Warp And Weft is Book 5 of the novel The Years Of Rice And Salt.

Fromwest, an ex-ronin who came to Turtle Island after China conquered Nippon, becomes a leader among the Hodenosaunee. He warns them against the flood of Chinese and Muslim colonists, insisting that the Hodenosaunee's political system of nations and inter-tribes marriages is the best way to hold together, and that they should have other nations join them too; together they will be stronger than guns. Fromwest has a connection with a dead friend, Peng, who taught the people how to survive smallpox, and who witnessed the birth of the Hodenosaunee.

359 Floating Bridge : KSR is probably referring to the one at Owasco in the Finger Lakes in New York.

359 fifty sachems : An Algonquian word meaning a chief of a North American tribe or confederation. I don't yet know how many the Iroquois confederacy actually had.

359 Doorkeepers : The Seneca tribe. See the Haudenosaunee entry below.

359 Hodenosaunee : Also spelled Haudenosaunee; it means "people of the long house" and refers to the Five Nations that formed the Iroquois league in upstate New York. These five nations are the Seneca, Cayuga, Onondaga, Oneida, and Mohawk. In the real world, encroachments on the east coast of the North American continent by European settlers led the Tuscarora to join this league in 1720-22, becoming the sixth nation, but in KSR's story, many other tribes have already joined the confederacy.

361 Longhouse : Type of long, narrow one-room building build by many peoples across the world. The Native American variant was built by fire-hardened poles covered by leaves and grass. More here. 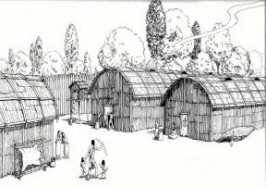 368 the big bay at the mouth of the East River : While there is indeed an East River off Manhattan in New York City, it's more likely that the Hodeonsaunee are using this word to refer to the larger Hudson River, which serves as a natural border for over a hundred miles.

372 born on the island Hokkaido : In the early 18th century, Hokkaido (still called Ezo then) was mainly populated by the Ainu, who are now almost completely assimilated into Japanese culture. From 1603 until the 1870s, Ezo was controlled by the Matsumae clan, who did indeed treat the natives cruelly.

373 kamikaze storm wind : Technically, the "divine wind" had protected Japan from previous invasions by the Mongols, not the Chinese, though the distinction may have been unimportant to Busho.

373 "Allah worshipers who had taken over [the] southernmost islands" : Perhaps KSR is paralleling the rise of Christianity in Kyushu in the 16th and 17th centuries of our world with a comparable flowering of Islam. Whether the "southernmost islands" refers to Kyushu and its satellites or to the Ryukyu islands (Okinawa; annexed by Japan in our world) is not clear.

373 a fort protecting a long peninsula : This is probably the Noto peninsula in present-day Ishikawa prefecture.

374 legendary fifty-three ronin : In reality, there is a legendary story of forty-seven ronin who, after their master had been insulted by another official and forced to commit suicide, avenged him by killing the official after lulling him into complacency by living lives of debauchery instead of honorable suicide. After their revenge, of course, they themselves were forced to commit seppuku, and their story has been acted and filmed dozens of times. The real incident occurred in 1702-1704, and the number may not be too divergent from reality, as there in fact may have been additional ronin who didn't participate in the murder.

374 Turtle Island : The name for the North American continent in a Native American mythology. I'm not sure which tribe, though.

383 shaman tobacco : Could be peyote.

383 Sakura : 桜 A traditional Japanese song about cherry blossoms. It's a bit too slow-paced to dance to.

384 Daganoweda : One of the original founders of the Iroquois League, along with Hiawatha (a man) and Jingosaseh (a woman). His name has many alternative spellings, including Daganaweda and Dakahnawida. It's not clear at all when the league was founded, though it seems to have been after a solar eclipse, and various explanations give it as 1142, 1090, and 1451. In any case, it's surely earlier than when KSR has it happening, which would be somewhat after Kheim's fleet reaches North America in 1620.